In the 1960’s, NASA conducted multiple studies in space, resulting in the discovery that certain wavelengths of light cause a reaction within various cell structures. These studies show that low level light increases the energy to the mitochondria of the cell and can have a healing, natural and healthy influence on the human body, based on which wavelength of light is utilized. Further use in aesthetic applications have shown that red light tends to stimulate fibroblast cells which then cause collagen and elastin to form. Infrared light has been shown to stimulate circulation, including the lymphatic system, which can help multiple cell structures resulting in a healing response. Of course, diet and exercise are important to lead a healthy lifestyle, while utilizing various light therapies can be an added benefit, potentially increasing the speed of the metabolism and improving both appearance and well-being. 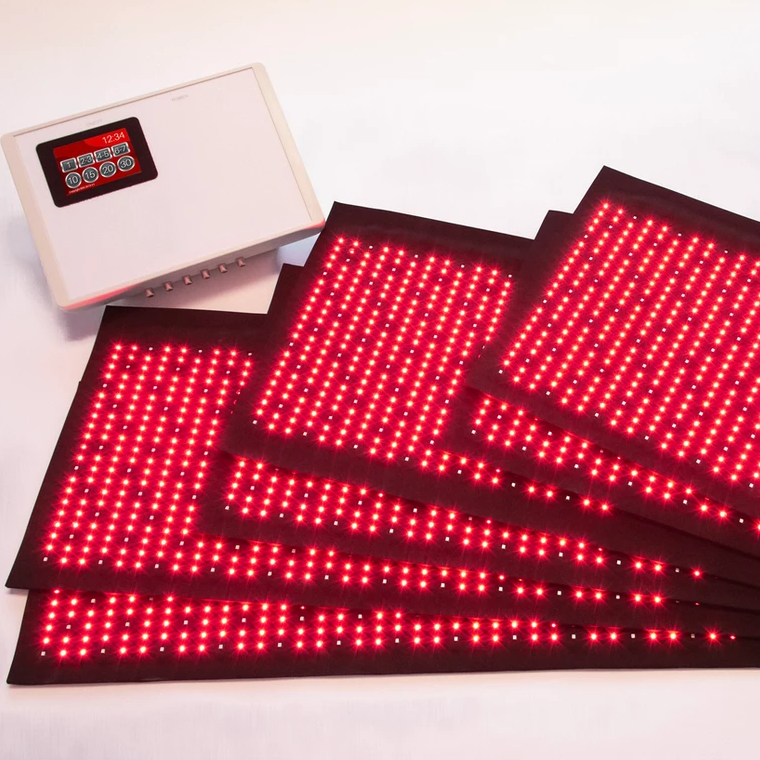 How does it work?

The RedLight Sculpting system delivers its therapy via high-powered surface mounted LEDs that are embedded in soft and flexible pads. The pads can be easily applied to any area of the body, conforming to the curves of a patient. A RedLight Sculpting session is pain-free, with no heat or discomfort, and is safe to operate for both the patient and the technician. 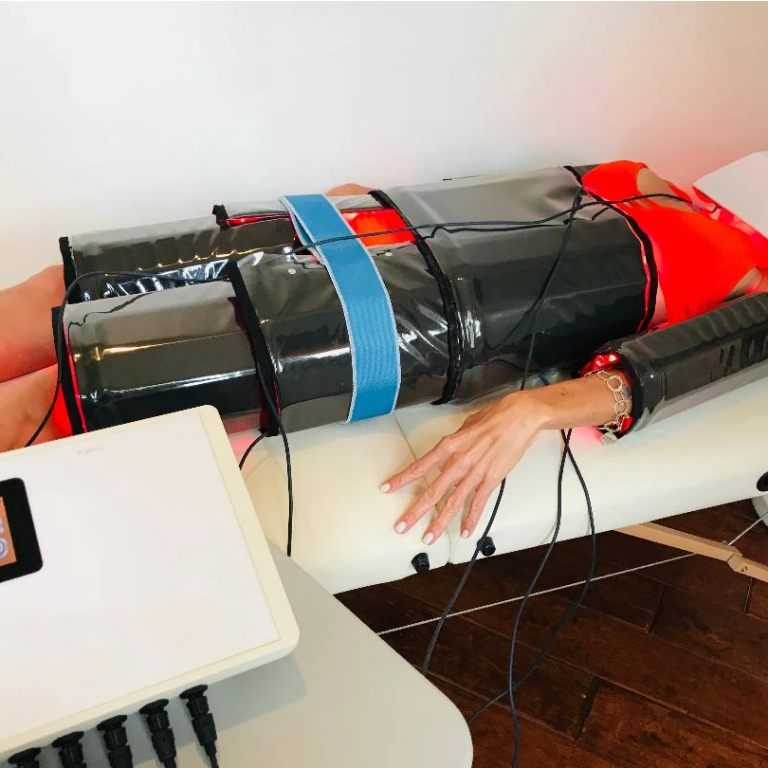 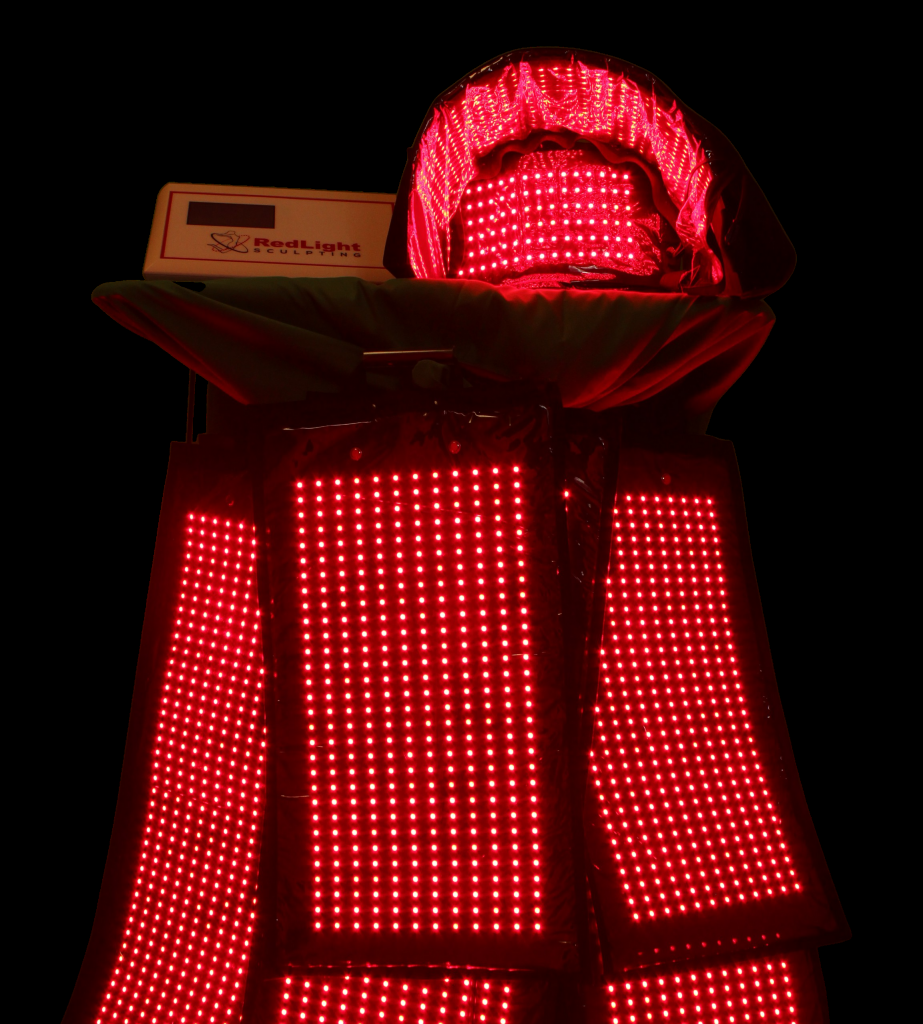 Non-invasive, LED-based light therapy is currently the highest in-demand treatment being sought by patients today simply because of the healthy nature of the outcomes. Unlike ultrasound, radio frequency, laser light and freezing, LED-based therapies do not cause cellular damage. Quite the opposite… LED light has been shown to promote a natural response within cells based on the wavelength of the light energy used and the type of cell it reaches. Both red and near-infrared wavelengths have been used in a wide range of therapies that promote healing.

Why the RedLight System?

RedLight Sculpting delivers red and near-infrared light at a higher intensity and power than the competition. This is due to the number of emitters per pad and the power of each. Patients experiencing the RedLight Sculpting will enjoy a much deeper and more complete exposure to these wavelengths of light. The session is painless; there is no heat or discomfort involved and no risk to either the patient or the operator. Completely safe. Totally effective.

Does it really work?

What can I expect during a RedLight Sculpting™ session?

During the session, you will be lying down on a treatment table. Flexible LED pads will be positioned in strategic places on your body as you simply enjoy a relaxing 17 minute session.

How does RedLight Sculpting™ work?

The unique light emitted from the RedLight Sculpting™ pads causes the fat cell membranes to temporarily alter the permeability of the cell wall. This brief change allows some of the fat contents to seep out to where it can then be processed by the body. The process also increases collagen and elastin in the skin while creating a slimmer appearance.

What happens to the fat?

After being released, the fat is broken down into free fatty acids. The fatty acids will then flow through the lymphatic system. the fatty acids can be either used as fuel or quickly eliminated by the body.

What happens to the fat cells?

The fat cells shrink to a fraction of their original size.

Why do you recommend a Liver Cleanse?

Your liver is the ultimate filter to remove toxins and nutrient byproducts from the body. The fast release of fat can sometimes overwhelm the liver and for this reason a high quality liver cleanse is recommended.

What area of the body can be treated?

The RedLight Sculpting™ can be effectively used on essentially every part of the body where localized fat deposits exist that are resistant to diet and exercise. This includes the stomach, back, butt, waist, hips, saddle bags upper legs, thighs, calves, upper arms, face and neck.

Results are usually seen after just one session.

How long lasting are the results?

The results can be very long-lasting. However, RedLight Sculpting™  does not destroy fat cells but releases some of their contents. If your caloric intake is less than your BMR or significantly higher than you require, your body will eventually store fat again. For this reason, we recommend a maintenance program of once or twice per month after the desired results are attained.

What risks are involved?

There are no risks or side effects involved in using RedLight Sculpting™. It is considered a safe alternative to invasive procedures such as traditional liposuction and skin tightening. The RedLight Sculpting™ treatment is 100% non-invasive and does not cause any bruising or scarring.

Who cannot do RedLight Sculpting™?

Any one with a pacemaker, defibrillator, transplanted organ, someone who is pregnant or nursing, active cancer or is going through chemotherapy cannot do RedLight Sculpting™.

No particular diet is required… but you can expect better results if you eat according to your BMR, reduce your carbohydrate intake for 36 hours and increase your water consumption.

Do I have to exercise?

Each of your sessions should be followed by 10 minutes of exercise or whole body vibration to stimulate circulation and help burn the fat that has been released.

Does RedLight Sculpting™ help with cellulite and loose skin?

Clients undergoing RedLight Sculpting™ have noticed an improvement with cellulite as well as skin tone, firmness and texture.

What research has been done?

RedLight Sculpting™ is based on over forty years of research starting with NASA experimentation and culminating with the aesthetic and orthopedic industries today. Following the recent discovery that 635nm light has an effect on fat cells, this new technology has created an explosion in the body sculpting industry.